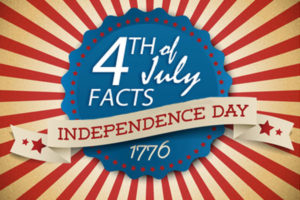 The 4th of July is here, and it’s time to celebrate Independence Day! But before you bring out the (legal) fireworks, fire up the grill, and partake in all the fun and festivities, be sure to take some time to remember why we celebrate this momentous day. To help you get in a celebratory patriotic spirit, here are 5 fun Fourth of July Facts you never knew!

3.) And neither are the fireworks: If you celebrate the Fourth of July outside the U.S., you still might see fireworks in Denmark, England, Norway, Portugal and Sweden. This is because thousands of people emigrated to the U.S. in the early 1900s. Some European celebrations on the Fourth take place near tourist destinations -- to attract U.S. travelers -- or near American military bases.

5.) Liberty Bell blues: Due to concerns about cracking the iconic instrument, the Liberty Bell has not been rung since 1846. Instead, every year, to mark the Fourth of July, the 2,000-pound bell is tapped thirteen times to signal for bells across the country to start ringing.

We hope you enjoyed these 5 fun Fourth of July facts you never knew. Simply Property Management- Paielli Realty, Inc. wishes you and yours a safe and Happy Fourth of July!

We Make it Simple Not Complex

You can share this story by using your social accounts:

Get in touch with us